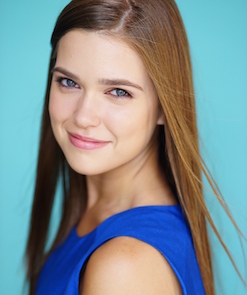 Elizabeth Labadie, born in Farmington Hills, Michigan with Identical Twin sister Jacqueline Labadie, started acting at a young age. Directing and performing plays for family members at holiday parties made her passion for performing and strong interest in acting obvious. These activities led her to begin landing roles in community musical theater productions for many years.

In 2013, Elizabeth got her start in the entertainment business by modeling for designers such as Vera Bradley, Stahls ID, and Hats By Rachelle appearing in print ads and magazines. Soon after, Elizabeth made her commercial debut in the national “LikeaGirl” commercial empowering young women and teaching girls the true meaning of what it means to do something “Like a Girl.”

In 2015 Elizabeth also booked a staring role as “Madison Kelly” in Feature Film “Crowning Jules” also staring Kristy Swanson, Kevin Farley, Deezer D, and Kenton Duty. The film follows the story of two very different twin sisters who take a road trip that makes them start to realize they may be more alike than they had ever thought. Meanwhile the plot takes a turn of events when they become in possession of a stole heirloom and are chased by dangerous thieves.

Most recently Elizabeth appeared in a Build A Bear commercial airing on Disney Channel and has a guest-starring role in ABC’s hit sitcom “The Middle.”

Elizabeth is an active participant in her school and church choir. She is involved in voice lessons weekly and enjoys singing musical theater pieces. She is also involved in weekly acting lessons with acting coaches from Los Angeles, California and enjoys every aspect of the Entertainment Industry.

Along with acting, Elizabeth and Jacqueline have a blog that focuses on celebrating each day and being grateful for what life brings titled “Celebrate Each Day.” She also enjoys spending time with her Identical Twin Sister and two younger sisters, attending high school, making videos, watching Netflix, traveling, and hanging out with friends, family, and two cats.